The following post was written before Shout! Factory announced the bonus features of their upcoming Six Million Dollar Man Blu-ray Collector's Edition. I have added updates to several sections where I respond to specific bonus features.
Read more »
Posted by Paul K. Bisson at 8:06 PM 4 comments:

It's Halloween! What better time to launch our new Bionicfans Blog and kick it off with something tried and true? Tonight, pop culture nerds will binge-watch their favorite scary entertainment featuring psychos and serial-killers to space-invaders and blood-suckers — preferably while handing out candy to cute little ghosts and goblins.

Fans of the Six Million Dollar Man and Bionic Woman are no different! Sure, we'll devour the old standbys like Fembots (the "Kill Oscar" trilogy) and Bigfoot ("The Secret of Bigfoot") but there are other episodes that have tipped the sci-fi scale into the creepy zone. I've shared this list before, but here it is again complete with added "Treats" in the form of links to help keep the fun going!

So, grab your favorite gooey snack and hold on to your broomsticks as Steve Austin and Jaime Sommers encounter all manner of 1970s' macabre — from ghostly doppelgängers and mind-controlled zombies to night demons and poltergeists! We'll even throw in some Salem Witch Hysteria and VINCENT PRICE for good measure!

#7 “Out of Body” BW S3E19 March 4, 1978 — Teleplay by Steven E. de Souza (Die Hard, 48 Hrs. — not to mention "Death Probe," SMDM and "On the Run," BW). When Jaime's American Indian boyfriend becomes the victim of foul play, he reaches out from beyond to help her catch his attackers and stop the activation of a deadly weapon. Guest-starring Nehemiah Persoff, Charlie Hill, and Richard Lynch.

TREATS:
TRIVIA: How is this episode connected to the TV series, Quantum Leap?
TRIVIA: Nehemiah Persoff also guest-stars in Steven E. de Souza's "Death Probe"
STREAM: Syndicated version free on NBC.com and the NBC app
DISCOVER: Out of Body at the Bionic Woman Files
LAUGH: Astral-project yourself to the Bionic Blonde
CONTRIBUTE: Out of Body at Bionic Fandom Wiki

#6 "The Ghosthunter" BW S1E14 May 26, 1976 — Co-written and directed by series creator, Kenneth Johnson (The Incredible Hulk, V); Jaime poses as governess to the daughter (Kristy McNichol) of an OSI scientist (Paul Shenar) after mysterious forces threaten the completion of his top secret project. But what of the connection between the little girl's dead mother and the Salem Witch Hysteria?

#5 "The Ghostly Teletype" SIX MILL S4E22 May 15, 1977 — In the last episode of season four, a top secret file vanishes on Steve's watch — leaving him as the prime suspect. But his attempt to clear his name leads to a strange encounter with a pair of paranormal twins and the mysterious Madame Marka.

TREATS:
NEW: The OSI Files Facebook LIVE review
TRIVIA: Linda Dano appears in two SMDM episodes and they're both on this list.
STREAM: Free syndicated version at NBC.com or on the NBC app
CONTRIBUTE to the episode page at the Bionic Fandom Wiki

#4 "The Night Demon" BW S2E20 March 16, 1977 — Jaime visits her old school professor, Thomas Bearclaw, an expert in Native American folklore. But when he unearths a mysterious statue from an ancient burial ground, something begins to terrorize anyone who touched the object — including Jaime. Guest-starring Gary Lockwood.
TREATS:
NEW: The OSI Files Facebook LIVE review
STREAM: Free syndicated version on NBC.com and the NBC app
DISCOVER: Behind-the-scenes goodies at The Bionic Woman Files
LAUGH: You'll be cursed if you don't read this Bionic Blonde review
CONTRIBUTE: The Night Demon at the Bionic Fandom Wiki
🎃          👻          💀

#3 "The Vega Influence" BW S2E09 December 1, 1976 — At a government facility on an remote, isolated island, Jaime is pitted against a living meteorite which has the strange ability to overpower the human will. When her colleagues and closest friends turn against her, she must find a way to interrupt the influence before it can take over the world. Rick Lenz returns as Michael Marchetti.

#2 "Dead Ringer" SMDM S5E18 February 13, 1978 — After suffering a severe concussion, Steve begins to see visions of his ghostly doppelgänger. When nobody believes him, he enlists the aid of renowned parapsychologist Margaret Winslow, who draws a connection between the mysterious sightings and Steve's infamous NASA crash — where he was clinically dead for 52 seconds. Guest-starring Linda Dano.

TREATS:
WATCH: The promo above is how I imagine it would have aired on ABC.
TRIVIA: Linda Dano also appears in another on this list,"The Ghostly Teletype."
STREAM: Free syndicated version at NBC.com or on the NBC app
CONTRIBUTE: to the episode page at the Bionic Fandom Wiki

BIONICFANS has celebrated THE SIX MILLION DOLLAR MAN and THE BIONIC WOMAN for over 20 years. But we also celebrate the fans who keep the fire alive for these shows through their own artistic expression. Launched in 1998, we started as an online discussion group. Today we're an active fan network that helps maintain interest in these shows through multiple fan sites, blogs, social media, podcasts, The Bionic Wiki, and discussion forums. 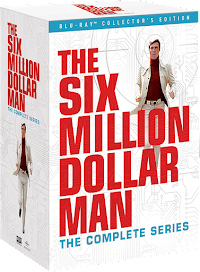 The Bionic Woman Streaming FREE in HD on The Roku Channel 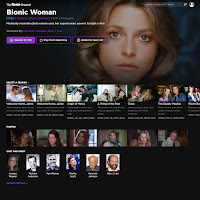 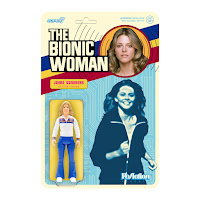 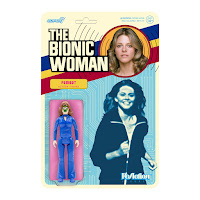 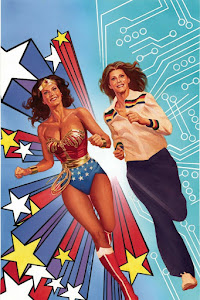